This content will be shown before all post
Today’s cooking adventure was Low Carb Whoopie Pies (Or Whoopsie Pies)! I started with the usually oopsie roll recipe found here: http://yourlighterside.com/?p=174. In order to make them chocolate flavored I added a few ingredients to the yoke mixture:
2 Tbsp cocoa powder
½ tsp of vanilla extract
2-3 packets of Splenda (I used 3)
Using a cookie scooper, I made 10 equal size mounds and baked as normal (25-30 mins). I set the whoopie pies on cooling rack to cool completely.
While the whoopie pies were cooling I made the filling. The filling consisted of the following ingredients:
5 oz. cream cheese
4 tsp of Splenda
1 tsp of vanilla extract
4 Tbsp of heavy cream
I mixed the ingredients together, except for the cream, until blended and I used the cream to get the desired consistency for spreading on the whoopie pies. Once the whoopie pies cooled, I spread the filling onto one oopsie roll and topped it with another. For an added touch a heated some peanut butter and drizzled it on the whoopie pie before (and after) I topped it.
Net Carb Count*:
Whoopie Pie 8 net carbs (entire batch)
Filling: 10 net carbs (entire batch)
Peanut Butter: 3 net carbs (1 Tbsp)
*Note carb counts are estimated based on the products I used. Check nutrition labels for accurate carb counts.
Picture of the Low Carb Whoopie Pies (before the peanut butter): 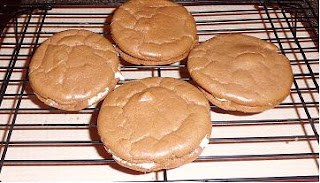 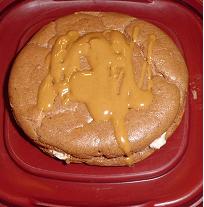 Comments: Overall the recipe was a success, but I would do a few things differently the next time I make them. The oopsie rolls did not have enough chocolate flavor for me. Next time I will try adding some melted sugar free chocolate for more flavor. Also, the filling did not spread very well and I should have softened the cream cheese/butter more and added a bit more cream to thin out the mixture. The carb count is a little high on these whoopie pies to have as an every day treat, but keeping them open-faced would cut the carbs in half and would make an excellent dessert.
This content will be shown after all post