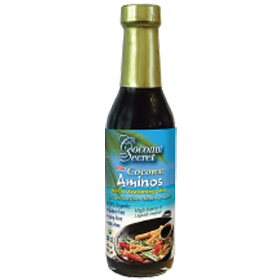 Coconut aminos is basically the “sap” of the coconut tree.  The sap produced is loaded with amino acids, minerals, and is low on the glycemic index.  Amino acids are important because they help with the repair and rebuilding of muscles tissue.  Amino acids also help enhance the nervous system, boost the immune system, and boost energy levels.  The sap from the coconut tree is combine with sea salt and naturally aged to create coconut aminos.
Coconut aminos is most notably used as a soy free substitute for soy sauce.  With all the research about the dangers of soy floating around I decided to reduce my soy intake.  I noticed a lot of Paleo recipes that included coconut aminos.  I had the same reaction you guys did and wondered “What the heck is coconut aminos?” While shopping at Whole Foods, I ran across coconut aminos and decided to give it a try.  I was a little hesitant at first, but boy did it surprise me.  Something magical happens when you add coconut aminos to your recipes.  I can readily explain why it is magical, but it creates a depth of flavor and it doesn’t have the overwhelmingly salty taste that soy sauce has.  I absolutely love it and I definitely recommend giving it a try.

Check out my favorite recipes that use coconut aminos: