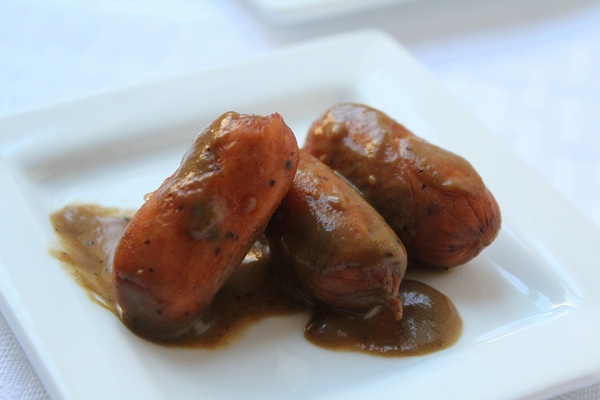 So I have to admit, my favorite thing to bring to a party was Cocktail Franks in BBQ sauce.  It was so easy to throw everything in a slow cooker and it didn’t require a lot of hassle.  Well, now that I’m staying away from nightshades I wanted to come up with a BBQ sauce that was nightshade free.  I discussed previously about the magical powers of coconut aminos (soy sauce substitute).  It is almost like everything I add it to turns to gold.  It adds such a depth of flavor without the ridiculously salty brine that soy sauce has.  If you haven’t tried it I highly suggest it!   This recipe requires making the BBQ sauce, but it takes almost no effort to dump the ingredients in a sauce pan and let it reduce.  Then you can either throw the cocktail franks in the pan or add everything to a slow cooker and it’s ready for your next party.

24 oz Cocktail Franks (replace with shredded chicken for nightshade free)
1 1/4 cup chicken broth (reduced sodium)
1/2 cup coconut aminos
1/4 cup Dijon mustard
1 1/2 tsp garlic powder
1/2 tsp black pepper
2 tsp sweetener of choice (optional)
Add all of the ingredients except the cocktail franks to a sauce pot.  Bring the mixture to  a boil over medium-high heat.  Allow the sauce to reduce and thicken (to the consistency of BBQ sauce)  Makes about 1 cup of BBQ sauce.  Add the cocktail franks and heat through.
Net Carb Count*:
Low Carb Nightshade Free BBQ Sauce and Cocktail Franks: 44 net carbs (for the entire recipe–serves 6-8)
Low Carb Nightshade Free BBQ Sauce: 32 net carbs (for the entire recipe–makes about 1 cup)
*Note carb counts are estimated based on the products I used. Check nutrition labels for accurate carb counts and gluten information.
Enjoy!
What dish do you always make for parties?  I would love to hear about it in the comments below!  🙂
~Karen

Products I used for this meal (click the images for more info or to purchase):