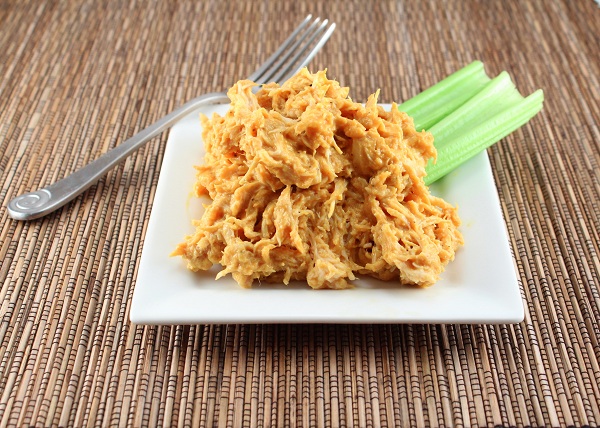 This content will be shown before all post
The other day I posted on Facebook about how the number of people seeing posts was getting lower and lower.  I encouraged the followers of Living Low Carb…One Day at a Time to “LIKE” and “Comment” on Facebook to increase the number of people seeing the post.  So many people came to the rescue, but it also gave people a chance to request certain recipes.  Surprisingly, there were a number of requests for BBQ. Low Carb BBQ sauce has been a tough thing to master especially under the critical eye of my Southern fiancé.  Well, over the summer I finally made a BBQ sauce he loved!  After making Grilled Mustard BBQ Chicken, I decided to make a shredded chicken recipe.  It was juicy, tender, and delicious!   So here is the recipe for those that are looking for low carb BBQ recipes among the sea of pumpkin and apple recipes that are making an appearance right now.
I used the following ingredients for Low Carb Shredded BBQ Chicken (adapted from Six Sisters’ Stuff):
1 lb boneless skinless chicken breast
1 lemon, quartered
1 small onion, quartered
1 1/4 cup BBQ sauce (make a double batch of the Mustard BBQ Sauce)
3/4 cup sugar free cola (do not use soda sweetened with aspartame)
Place chicken in a slow cooker.  Top with the lemon and the onion.  Add the BBQ sauce and soda. Stir to incorporate.  Cook on LOW for 6-8 hours or on HIGH for 3-4 hours.  Remove the chicken breast and shred with forks.  Add the cooking liquid or more BBQ sauce to the chicken.  Serve in lettuce wraps or on your favorite low carb bread.
Net Carb Count*:
Low Carb Shredded BBQ Chicken: 20 net carbs (for the entire recipe)
*Note carb counts are estimated based on the products I used. Check nutrition labels for accurate carb counts and gluten information.
Enjoy!
Wish you had more recipes featuring a certain ingredient?  I would love to hear what you are looking for in the comments below!  🙂
~Karen
This content will be shown after all post